Skip to main content
It looks like you're using Internet Explorer 11 or older. This website works best with modern browsers such as the latest versions of Chrome, Firefox, Safari, and Edge. If you continue with this browser, you may see unexpected results.

According to the Centre for Evidence Based Medicine (CEBM), "one of the fundamental skills required for practising EBM is the asking of well-built clinical questions. To benefit patients and clinicians, such questions need to be both directly relevant to patients' problems and phrased in ways that direct your search to relevant and precise answers." 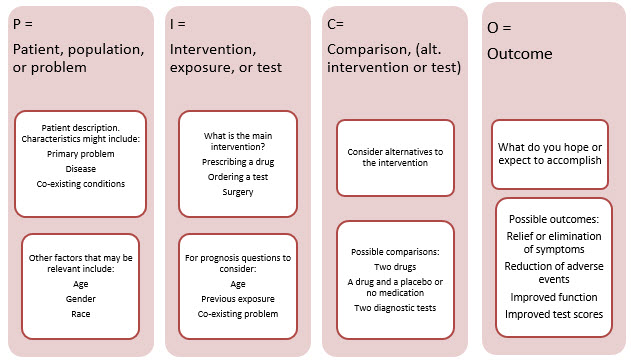 Meta-analysis: A statistical technique that summarizes the results of several studies in a single weighted estimate, in which more weight is given to results of studies with more events and sometimes to studies of higher quality.

Systematic Review: a review in which specified and appropriate methods have been used to identify, appraise, and summarise studies addressing a defined question. It can, but need not, involve meta-analysis). In Clinical Evidence, the term systematic review refers to a systematic review of RCTs unless specified otherwise.

Randomized Controlled Trial: a trial in which participants are randomly assigned to two or more groups: at least one (the experimental group) receiving an intervention that is being tested and another (the comparison or control group) receiving an alternative treatment or placebo. This design allows assessment of the relative effects of interventions.

Cohort Study: a non-experimental study design that follows a group of people (a cohort), and then looks at how events differ among people within the group. A study that examines a cohort, which differs in respect to exposure to some suspected risk factor (e.g. smoking), is useful for trying to ascertain whether exposure is likely to cause specified events (e.g. lung cancer). Prospective cohort studies (which track participants forward in time) are more reliable than retrospective cohort studies.

Case control study: a study design that examines a group of people who have experienced an event (usually an adverse event) and a group of people who have not experienced the same event, and looks at how exposure to suspect (usually noxious) agents differed between the two groups. This type of study design is most useful for trying to ascertain the cause of rare events, such as rare cancers.

Case Series: analysis of series of people with the disease (there is no comparison group in case series).

A 55 year old female has a diagnosis of osteoarthritis in her knees. She has been taking NSAIDs but wants to know if glucosamine sulfate would be an effective treatment.

PICO Question: In patients with knee osteoarthritis, is glucosamine sulfate an effective treatment when compared to NSAIDs?